Michel'le has been active in the Charlotte and North Carolina rugby community since 2014.  She played for the Charlotte Women's club from 2014 - 2018.  She is also an active referee with SERRS and is currently that group's Secretary.

She attended Juniata College and played for the school club, where she was Captain and Vice-president of the club. Some notable facts about Boots include:Everybody welcome Boots to the NCYRU family!

Please check out the USA Rugby post for more information and to apply for these openings.

North Carolina Rugby Union is proud to announce a series of online development webinars for our community. The first part of the series begins this week and is focused on education for anyone who may be new to the game of rugby. We are excited to partner with Advantage Rugby Referees for our first 3 webinars. Come and learn the history of rugby, gain an understanding of rugby in other countries and the United States as well as learn the basic laws of the game.

The second part of our Series will begin in October and will focus on coach development featuring the Rugby United NY coaching staff from Major League Rugby.

To Register for the Event, Click Below!
REGISTER HERE

NC has moved to Phase 2.5. As a result, rugby teams will begin organizing for practice. Please contact your local club for more information. Teams may share equipment in pods. Intra-Squad scrimmages are permitted. No games can be played against other teams during this phase. Appropriate social distancing must be observed. 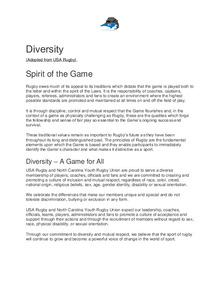 PDF
The NCYRU Return to Play Guidelines contain the minimum requirements for clubs in our state organization wishing to return to play. The additional document contains general guidance from our region administrators and some best practice information that may be helpful to Clubs as they begin to start practicing. 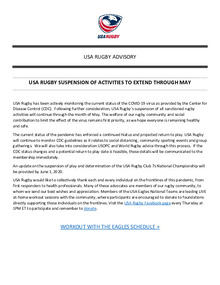 PDF
The NCYRU fully supports USA Rugby's Return to Play Guidelines. It does not condone any return to play by NCYRU affiliated teams/clubs that are inconsistent with the current guidelines. Any such activity is being done by those clubs independently and outside of affiliation with NCYRU.

Conference Playoff Results Are In
February 24, 2020

The results of the semifinal playoffs are complete and the field is set now for the Finals on Saturday, Feb 29 at Hough H.S.  The conference playoff results are as such:
The field is now set for the 3rd place Bronze medal match and the State Championship match.  All matches will take place at the Hough H.S. football stadium on Saturday, Feb 29.  Match times are as follows:
We invite and encourage all teams, players, coaches and families to come out and support our Finals and State Championship matches.  This should be a very exciting day of rugby.  We are especially thankful for Megan Ketchum and Hough H.S. for hosting the state championship

NCYRU wishes the following teams the best of luck in their quest for the championship!

The East v West Final Championship game will be held the last weekend in February.

USAR Level 1 Referee certification course is being held in Charlotte at Queens University on 02-16-20. Sign up in USARugby's Webpoint system.

Karen Fong Donoghue from the Rugger's Edge will be hosting a seminar for families of student athletes interested in learning more about the collegiate rugby landscape in the USA. Sign up is required. Seminar will follow the USARugby level 1 referee course on 02-16-20. 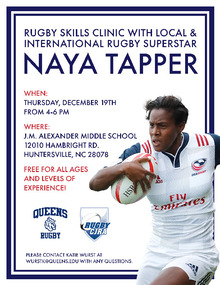 PDF
Naya Tapper is coming home and she is leading a clinic! We encourage everyone to go and meet our hometown superstar. Thanks to Naya for offering this fun skills opportunity to the youth in our community.

The North Carolina Youth Rugby Union is happy to announce that the Single High School League will begin competition on December 6th, 2019. Games will be played on Friday evenings and Saturdays through February. The full schedule is posted on the NCYRU website - check it out and make plans to attend!

NCYRU President Dave McCarthy said “The NCYRU is coming off of a very successful Sevens Season that saw many new girls and boys find the enjoyment of Rugby. I am very excited to see many of the new faces along with our existing players as we begin our ‘19-20 season.”

This season, the league will boast 14 teams competing in two conferences. The SHS League will have 8 weeks of regular season competition and then wrap up with a State Championship at the end of February. League Director Cam Hayes said “As we prepare to kick off the NCYRU SHS Boys Rugby season for 2019-2020, I want to wish all of the players, coaches, and schools, the very best for a competitive and fun season of rugby.  Each year we have seen the growth of rugby in high schools throughout North Carolina and this year we welcome two new high schools to the league: Olympic H.S. in Charlotte and Pinecrest H.S. in Southern Pines.”

The league is supported primarily by referees from the Southeast Rugby Referee Society. The NCYRU is always looking for people to officiate games, please contact us if you are interested in helping.
Opening week matches will kick off at 7pm on Friday, December 6 and at 1pm on Saturday, December 7.  Go out and support your local HS Rugby team this weekend. Rugby in North Carolina is strong and growing!

At North Carolina Youth Rugby, we pride ourselves in providing rugby background, training, and games for kids all across North Carolina. Our coaches are dedicated to teaching your children the art of the game while teaching them important aspects about life. Rugby can teach children to work as a team, build strong relationships, teaches respect, time management, and can build self esteem.

Contact NCYRU today to learn more about our teams and registration!